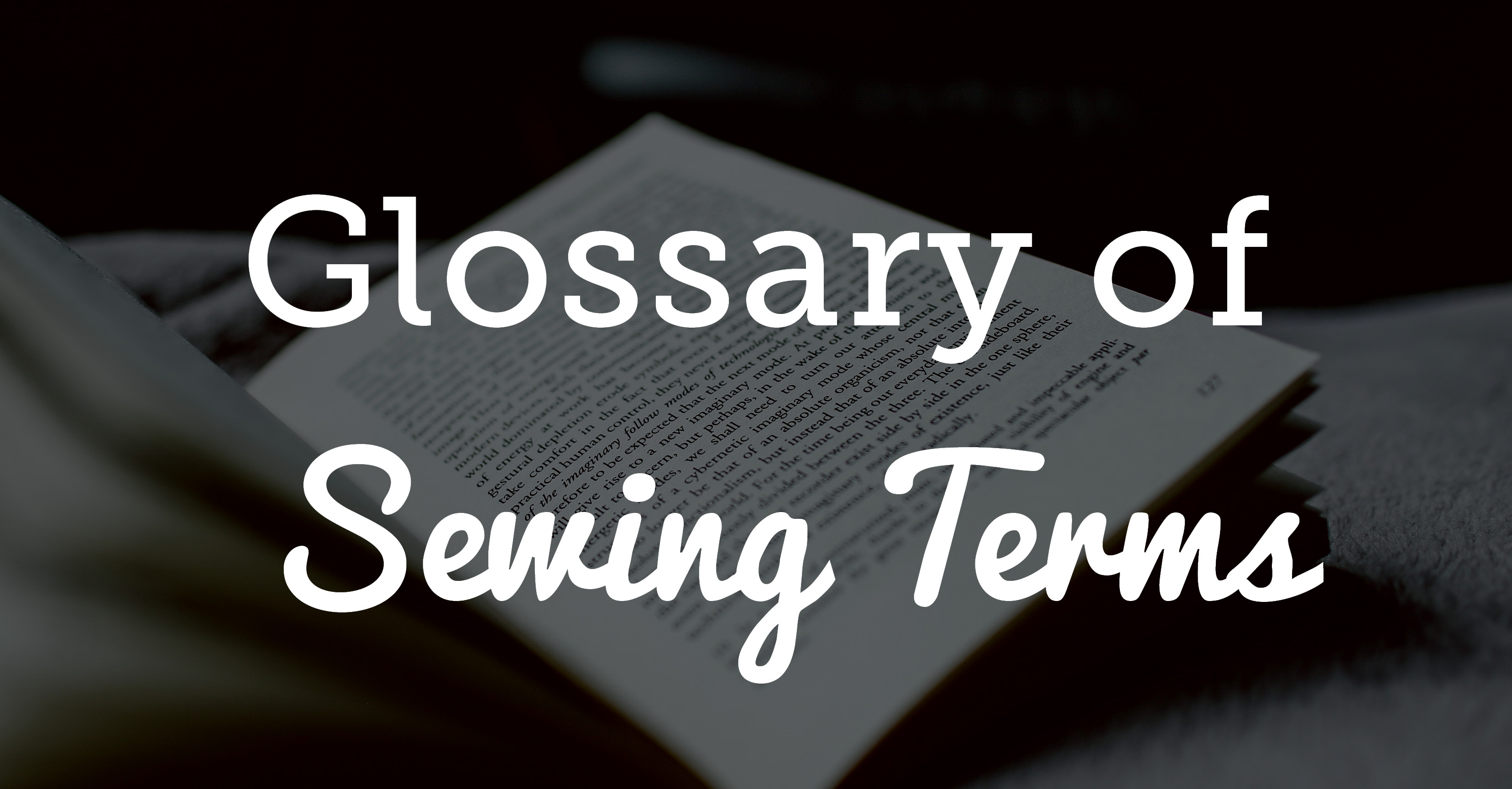 What’s in a name? Here’s our ultimate list of sewing terminology. Did we miss a crucial one? Let us know by emailing editor@nationalsewingcircle.com.

Back Stitch: The process of stitching backwards over the loose threads at the beginning and end of a project to secure the threads so they don’t come loose and the fabric pieces come apart.

Bar Tack: A short reinforcement of threads used on parts of a garment or project that are especially stressed, such as belt loops or buttonholes. Also known as a tack.

Baste: The technique of hand stitching or machine stitching with a long stitch length to temporarily hold two pieces of fabric together before they are stitched together permanently. A backstitch or a knot is not used in case the threads need to be pulled out and removed.

Bias: A woven fabric does not have a stretch across the grain line from left to right, and up and down. There is no stretch in the grain. However, diagonally across the grain is the bias, where the fabric will give a bit, which is why making garments “on the bias” or “cross-grain” give a woven a nice drape.

Bias Tape: Pre-made strips of fabric in various sizes that are cut diagonally across the grain to give the fabric some movement so it will turn curves nicely.

Binding: In sewing, binding can refer to finishing a seam to hide it (using bias tape, for example). In quilting, it is the use of a thin strip of fabric (similar to bias tape, but not necessarily cut on the bias) to hide the raw edges of the quilt to give a nice finish.

Blind Hem (also known as Invisible Hem): The technique of sewing a blind hem stitch, which consists of several straight stitches followed by a zig-zag stitch, across the hem of a garment so that the thread on the right side of the fabric is nearly invisible to the naked eye. Can be done by hand or machine with a Blind Hem foot.

Casing: A small “tunnel” of fabric through which a drawstring or length of elastic can be threaded through. For example, on the waistband of a skirt, you can fold the fabric down ½” (to hide the raw edge), then down again 1″, and stitch near the fold to create a channel for the elastic to stay along the waistline.

Clipping Corners: The process of snipping the triangular piece of seam allowance off of the corner of a seam to prevent bulk in the corner when turned right side out.

Crosswise Grain: The threads of woven fabric that run perpendicular to the selvage.

Darning: A technique used by “scribbling” the needle over a torn section of fabric or a hole to do a repair. This requires a darning foot so the feed dogs will not direct the fabric.

Darts: A wedge-shaped fold in the fabric used to shape garments to the body.

Ease: Distributing the fabric on a curve evenly to join to another curve (usually going in the opposite direction) to get a good fit. Commonly used in sleeves.

Edge Stitch: The process of stitching on the exterior side of a project near a fold or seamed edge to keep them in place. Also known as Top Stitching if done slightly away from an edge.

Embroidery: A hand-sewing technique used to decorate fabric with needlework designs. Can also be done on a sewing or embroidery machine.

Eyelet: Small rings made of metal or plastic that are inserted into the fabric with a special pair of pliers to reinforce a hole. For example, on the back of wedding dresses that lace up, the laces go through the eyelets. Also refers to a type of fabric with holes as the design, and each hole is created and reinforced by embroidery.

Facing: The fabric used to finish the raw edges of a garment such as the necklines, armholes, and waistbands. This is used to make the finished edge look nice and lay flat.

Feed Dogs: The feed dogs move the fabric under the presser foot of the sewing machines and control the length of the stitch.

Finger Press: The heat and force of your fingertips can easily put a crease in the fabric without using an iron.

Free-Motion Quilting: The use of a darning, hopping or free motion foot, with the feed dogs lowered, so you can move the fabric freely under the needle and effectively “draw” on the fabric with the thread in whatever shape comes to mind.

Gather: A gather is created by running a thread along the length of the fabric, and then shortening the fabric along the thread by scrunching them together to make a ruffled effect.

Godet: A triangular piece of fabric inserted into a skirt to widen the bottom to add movement and fullness. Is also used in sleeves and bell-bottomed pants.

Grading: A process of trimming the seam allowance in order to reduce bulk in the seams.

Grain: The direction of the threads running through a woven fabric.

Gusset: In a garment, a gusset is a triangular piece of fabric inserted into a seam to add roominess. In bags, a gusset is used to pinch in the corners to create a bottom from the sides.

Hand: A term used to describe the feel and texture of a fabric. “This fabric has a nice hand to it.”

Hem: The act of finishing the bottom of a garment so no raw edges are seen.

Interfacing: The term for a variety of materials that are used on the wrong side (either fused or sewn in) of a fabric to give it more stability or loft or whatever the desired effect may be.

Interlining: A lining used on the back of a fabric, but sewn together with the fabric so the two fabrics act as one during construction.

Lining: An inner layer of fabric that provides a “slippery” layer underneath a garment to allow it to move freely around the body when worn. Linings are also used to cover seam allowances.

Muslin: An inexpensive, normally un-dyed fabric used to create pattern pieces, or to test out a garment before using the more expensive fashion fabric.

Nap: Some fabrics, like velvet or velour have a pile, and the fibers don’t quite lay vertically, but in a particular direction. This is known as the nap. You can feel the nap if you run your hand back and forth across the fabric. The nap should run downwards in the project.

Neaten Edges: The technique of finishing a raw edge in whatever manner you prefer; using pinking shears, a zig-zag stitch, an overlock stitch, or serging the edge. When a pattern asks you to neaten an edge, you choose the manner in which the edge is finished.

Patchwork: The art of sewing small pieces of fabric together to make a larger fabric or design. It is then usually quilted.

Pattern: A set of sewing instructions with sized templates used to assemble a sewn item.

Piping: A trim of fabric-wrapped cording inserted into a seam to embellish a garment or project. The cord is wrapped in bias tape so it will curve easily around all seams.

Placket: An opening in the upper part of trousers, skirts, or sleeves. These allow the garments to open up to make room for the garment to be slipped on easily.

Pleat: A fold formed by folding over the fabric and stitching it to itself to secured the fold in place. Used in garments to fit narrower parts, or in drapes for texture.

Pocket: A rectangle (or other shape) of fabric inserted into a garment accessible from the finished outside edge of the garment to hold small items.

Pressing: Using an iron to press wrinkles from a fabric or press a crease in place.

Pre-Wash: After a fabric is purchased, it can be pre-washed. This is an important step if it is going to be made into a garment or project that will be machine washed and dried. This way the fabric will be pre-shrunk before constructing the garment. Typically, pre-washing of the fabric is done in the same manner that the garments is going to be washed when completed.

Quilting: A method of sewing (or tying) two layers of cloth together with an inner layer of batting between it.

Ruche: A pleated or gathered strip of fabric used to embellish a garment or project.

Seam: The line where two pieces of fabric are joined together by sewing them with thread.

Seam Allowance: The small space of fabric between the raw edge and where the seam is sewn. Common seam allowances range from ¼ inch to 5/8 inch. Woven fabric can fray, so the seam needs to be sewn away from the raw edge for security.

Seam Ripper: A tool used for picking or ripping out sewing stitches.

Selvage: The edge of a woven fabric produced during the manufacturing process. This edge keeps the fabric from raveling.

Serging: A method of looping threads over the raw edge of the fabric to finish the edge to prevent fraying.

Shirring: Several gathered seams in a row next to each other. This can easily be achieved by using elastic thread.

Smocking: A technique in which pleats are gathered and folded in a variety of formations to make texture.

Stay Stitch: Pre-sewing along the edge of a curve to help prevent the fabric from stretching along the “bias” when assembling a garment. Often used on the curves of sleeves for stability during garment construction.

Stitch-in-the-Ditch: A quilting term used to describe the method of stitching along existing seams in a patchwork piece or quilt top in order to quilt it together with the batting and backing.

Tension: The amount of “pinching” done to your thread as it flows through your sewing machine. Thicker fabrics need a higher tension (a harder pinch so the thread doesn’t flow out too quickly), and thinner fabrics need less tension (a lesser pinch to let the thread out easily to prevent puckering).

Top Stitch: The process of stitching on the exterior side of a project to finish seams or folds to keep them in place. Usually paired with a longer stitch length which looks more professional and can make it easier to go in a straight line. Also, known as Edge Stitching if it is done near a fold of fabric.

Trim: A pre-made ruffle, fringe, or other decorative embellishment that can be sewn into a garment or sewing project to add visual interest.

Under Stitch: Sewing a line of stitching along the seam allowance to the facing or lining to help keep it flat and prevent it from popping up and creating bulk under a seam.

WOF: Width of fabric. You will find this abbreviation in many quilting patterns.

Wrong Side: The “back” side of the fabric; usually the opposite side of a distinctly printed fabric.